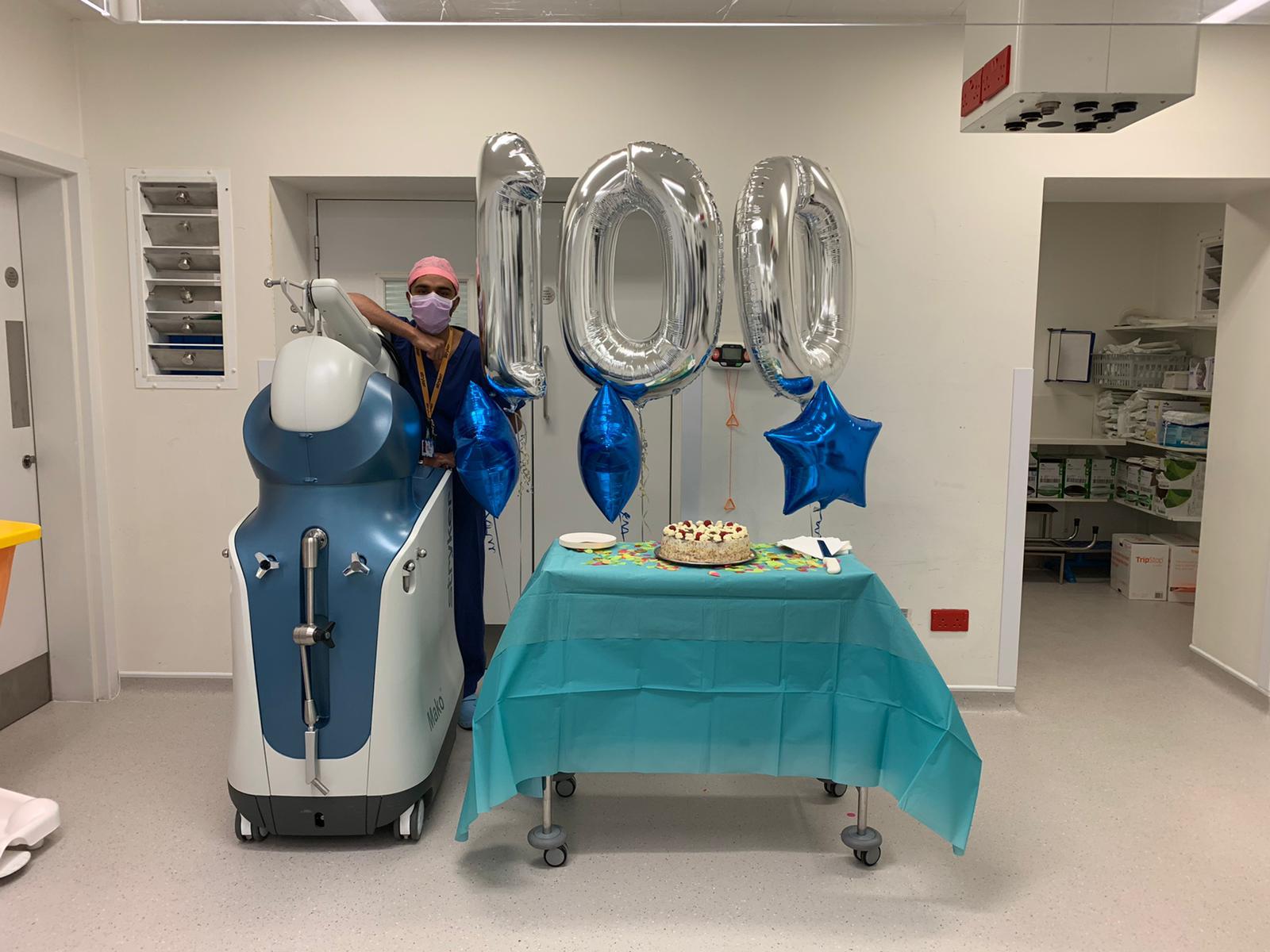 A patient who was the 100th person to be operated on at Parkside Hospital using the Mako robotic-arm system has said he is ‘blown away’ by the extraordinary technology involved in the procedure.

Peter Mason, 75, said he ‘wholeheartedly recommends’ the Mako robotic-arm assisted surgery to any patient suffering with knee pain as a result of wear and tear or arthritis.

Peter’s surgery at Parkside took place on Saturday 14 November and marked a century of operations at the hospital using the ground-breaking Stryker Mako robotic arm. He had both knees partially replaced with the help of the robotic technology.

The Mako robot allows the orthopaedic team at Parkside to undertake hip and knee surgeries using a state-of-the-art method, which allows patients to get back to an active lifestyle quicker than more traditional surgery. The first surgery at Parkside using the Mako robotic-arm system was in April 2019.

A retired engineer, Peter enjoyed keeping fit and was very active before sustaining an injury to his knee in February 2020.

Peter said: “I’m an active person and liked to keep fit despite developing arthritis in my knees some years ago. I enjoyed sailing, hill-walking, and skiing – but that all soon changed. In February, I hurt my knee somehow, and after that, my life essentially closed in. I was in excruciating pain and my mobility drastically reduced. I went from long walks to barely being able to pop to the shops. To top it off, the coronavirus pandemic had just reached the UK and the healthcare system would be under increasing pressure. I certainly didn’t want to get caught in the system waiting for a knee op – and I definitely didn’t want to catch Covid”.

After a friend recommended Parkside Private Hospital and the expertise of Mr Giles Heilpern, Peter made an appointment and soon learned that he would need both of his knees partially replaced. While only one of his knees was in pain, the x-rays showed that both were equally worn, and the non-painful knee could cause severe problems at any time.

“Mr Heilpern was fantastic – an expert in every sense of the word. We had some scans done and he brought up the subject of robotic surgery, which appealed to me as an engineer. The idea of precision surgery and minimal waiting times sounded great – it was a no-brainer to do it at Parkside really”.

Peter had further scans done including an MRI, X-ray and a CT scan to generate an exact model of the patient’s knee or hip. The Mako robot uses this information at the time of surgery to allow the surgeon to determine how much bone to remove in order to improve the accuracy and precision of the procedure.

After a smooth pre-operative assessment, Peter had his surgery on Saturday 14 November, describing it as a ‘seamless and reassuring process’. Peter said: “I don’t go into hospitals much thankfully, but the care and level of attention I received at Parkside more than met my expectations. From the preoperative care and the surgery itself to the robust Covid precautions – I couldn’t fault a thing”.

Peter asked to be sedated during the surgery, and was unconscious during the hour-long procedure. This meant he didn’t feel any pain or discomfort, and awoke to find his new knee already in place. The other anaesthesia option available for Mako robotic arm-assisted surgery patients is regional anaesthesia, which involves blocking the nerves to a specific area of the body without affecting your brain or breathing. Peter described the surgery as “smooth as anything”, saying it was “reassuring that the Mako robotic-arm reduces the risk of surgical errors, improving patient safety.”

Peter stayed in hospital for a few days and was discharged a few days after the surgery, on Wednesday. He is continuing his recovery at home and four weeks after the procedure is completely off painkillers and restarting his everyday activities.

“I’m not quite there yet – it’s a long process after surgery – but I don’t think it could have gone any better. My advice to anyone considering surgery is to do the research beforehand. Know what you’re going into: check out the hospital, the surgeon, the type of anaesthesia you might want. I couldn’t fault a thing and am looking forward to continuing my recovery and getting back to skiing as soon as Covid allows!”

The Mako robot is fantastic. Results to date have exceeded expectation – patients report less pain and better early function after surgery and go on to achieve excellent long-term outcomes. I am proud to be involved with this innovative technology and genuinely see it as a game changer in knee replacement surgery.”

More information on the Mako robotic-arm assisted surgery at Parkside can be found here. 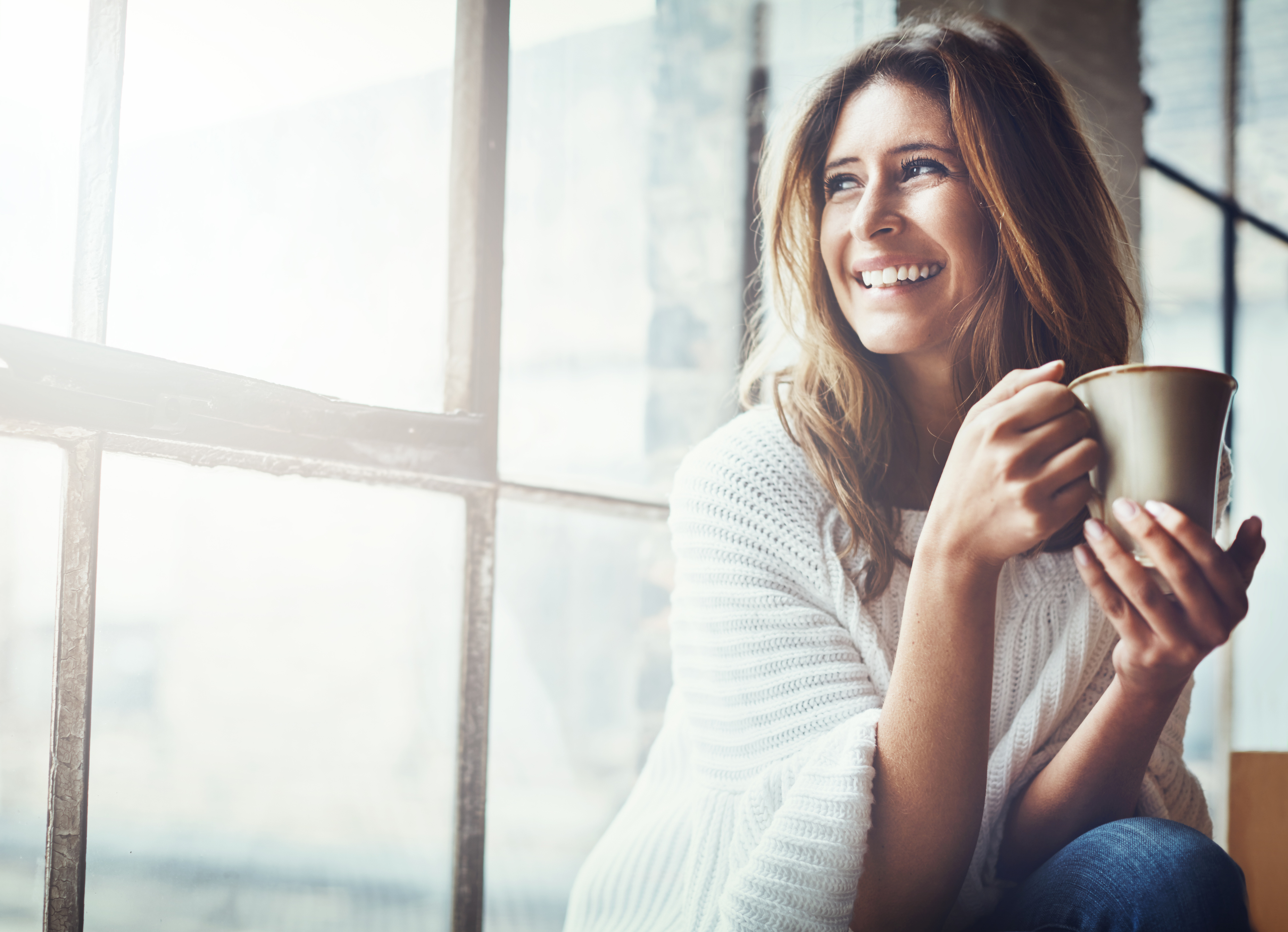 HRT and breast cancer risk: the bogeyman in perspective

In this article Professor Isaac Manyonda, Consultant Gynaecologist, looks in more detail at HRT and the risk of breast cancer. It can be argued that 'the big C' - breast cancer - is a major determinant of whether women take hormone replacement therapy (HRT) or not. Yes, breast cancer is the most common cancer among women in the developed world, accounting for 30% of all cancers in these women. And as we approach October, breast cancer awareness month, this fact is ever more pertinent. 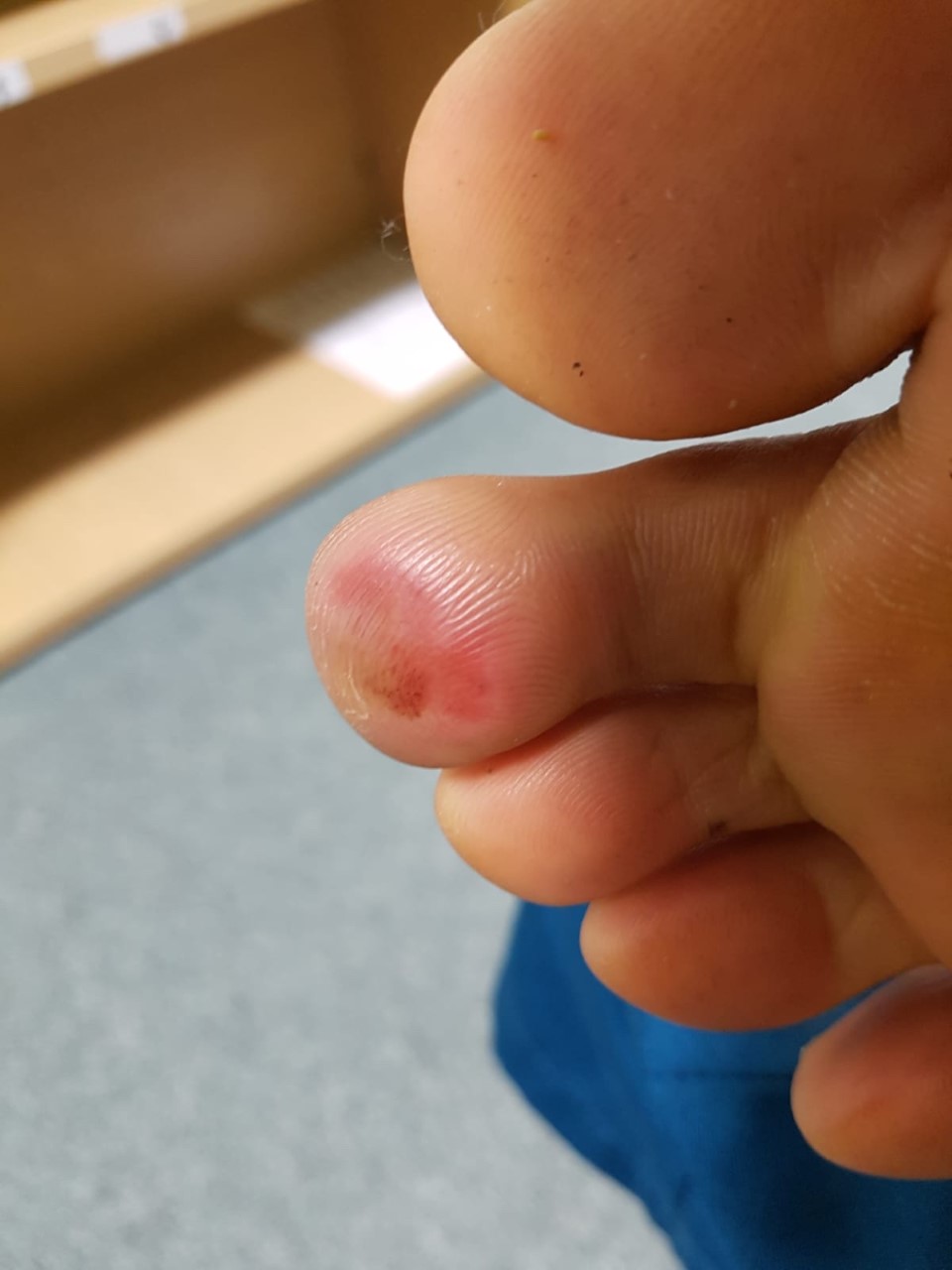 ‘Covid toes’ – how coronavirus can affect your skin

For some people, so-called ‘Covid toes’ may be the only sign of a coronavirus infection. Mr Pal Ramesh, Consultant Orthopaedic Surgeon, tells us what he’s been seeing and hearing. 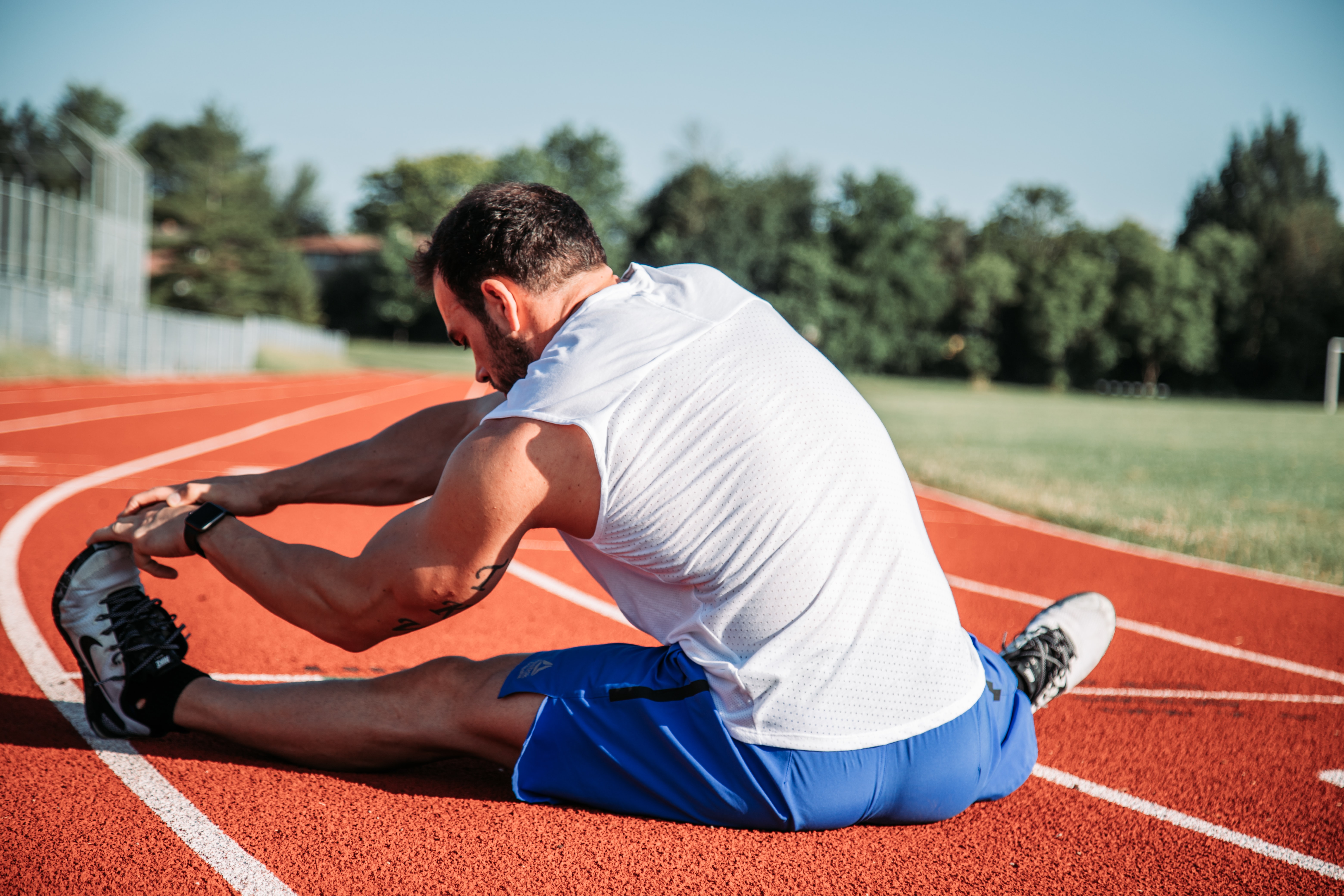 Exercising and injury: tips on how to prevent common injuries

For many people who play sports or are regularly active, one concern is how to avoid injury or reduce the risk of injury. Injury can occur in any sport, however, for most people the benefit to physical and mental health from exercising outweighs the risk of injury.
This website uses cookies to improve your experience. By clicking 'Accept', you agree to the storing of cookies on your device to enhance your site experience and for analytics purposes. To customize your settings click here: Cookie settingsAccept
Privacy & Cookies Policy